Mobileforce CPQ seamlessly integrates with your CRM, so you can easily access the CPQ module from the Zendesk Sell User Interface as well as creating a proposal from the Zendesk Deals module.

Mobileforce CPQ is a cloud-hosted product, which can be easily installed into your Zendesk software solution. Mobileforce CPQ provides two distinct apps for each use case it support. Each app must be installed from the Zendesk App Marketplace:

Mobileforce CPQ for Zendesk Sell is designed for the sales use case, where quotes are created based on existing deals within Zendesk Sell. Click the link below to access the page for the app on Zendesk Marketplace:

Mobileforce CPQ for Zendesk Support is designed for the ticketing use case where quotes are created based on tickets within Zendesk support. Click the link below to access the page for the app on Zendesk Marketplace:
Mobileforce CPQ for Support/Ticketing 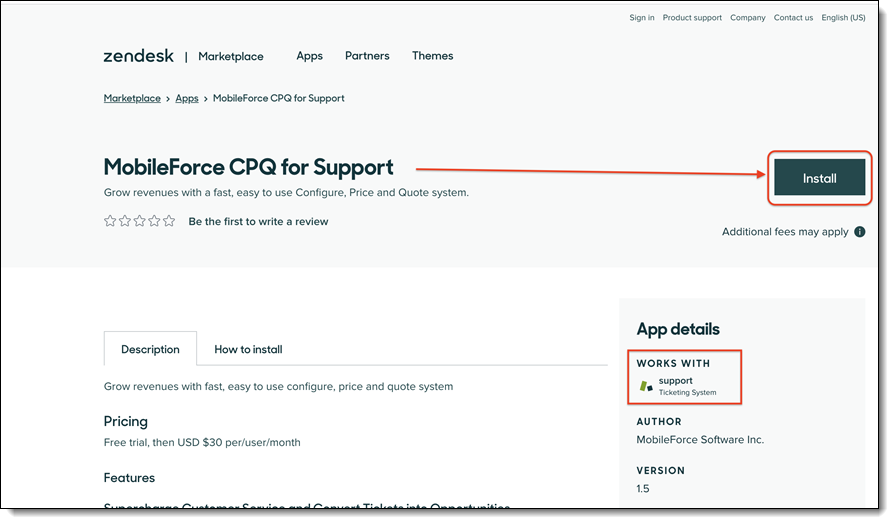 Additionally, the installation instructions are included in the How to Install tab of either marketplace page.

If successful, Mobileforce can be enabled and disabled in Zendesk by selecting Settings > Integrations > Apps.

Before you can use Mobileforce CPQ, you would need to authorize it to access your CRM Data from Zendesk Sell. Click the Mobileforce icon from the Zendesk menu bar. The authorization page is displayed. 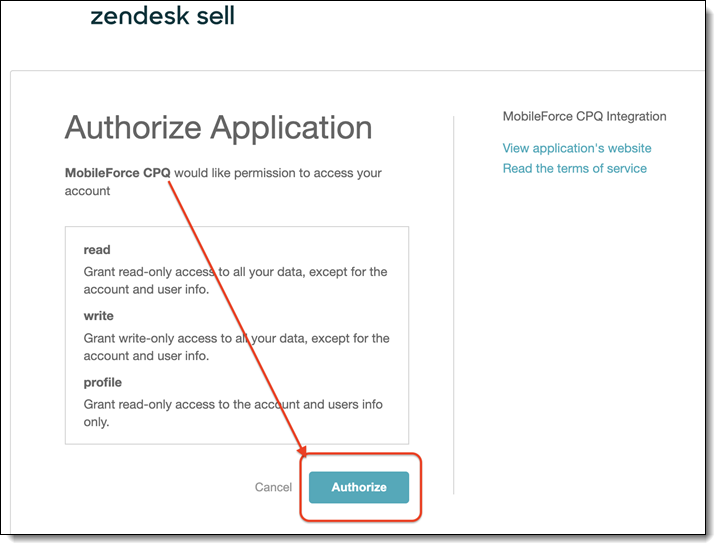 The data from Mobileforce CPQ and Zendesk reside on separate cloud instances, so none of the CRM or Support data persists on the Mobileforce cloud, providing you with a secure CPQ use scenario.

icon from any Zendesk page.

When you click the button, the CPQ main menu is displayed.

:::(Info) Note:)
By default, the CPQ main menu is displayed as a persistent pop-up window within Zendesk. Mobileforce recommends opening the application in its own tab by clicking the Open in New Tab button.
:::

From here you can do the following actions:

Creating a Mobileforce CPQ Quote from a ZenDesk object

Zendesk allow you to create a proposal directly from one of the following existing (native) module/objects:

Open the desired Deal or Ticket. Mobileforce CPQ is listed as a card on the right sidebar.

From the right pane, click the +Add button to create a new quote for the deal.

When you create the quote, notice the fields that have been prefilled from information from Zendesk Sell.

Notice how, many fields of the quote are already populated by virtue of Mobileforce CPQ reading information from Zendesk Sell objects such as contact and deal.

When a proposal/quote is created from a Zendesk Deal, the Deal, Account, Contact, and other fields are prepopulated from the integration with Zendesk Sell.

The prepopulated fields in the quote are determined by options specified in CPQ Setup, so if you need additional field to be prepopulated with attributes from Zendesk CRM, contact your CRM or CPQ Administrator.

Writing the Quote back to Zendesk

Once the quote is complete and approved, Mobileforce CPQ enables you to save the quote back to your Zendesk object, using the Update Quote to Zendesk button, which updates the following fields associated with the deal: Amount, Pipeline, and Stage

Was this article helpful?
Thank you for your feedback! Our team will get back to you
How can we improve this article?
Your feedback
Comment
Comment (Optional)
Character limit : 500
Please enter your comment
Email (Optional)
Email

Take your Sales & Service Ops to the NEXT LEVEL.
Software
Solutions
Company
Connect With Us
Sales and Support
Copyright © Mobileforce Software, Inc. All Rights Reserved

By entering and using this site, you consent to the use of only necessary cookies to enhance your site experience and improve our services.